Ancient creature revealed as lizard, not a teeny dinosaur 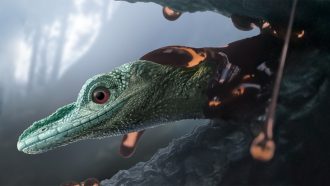 A tiny creature trapped in amber 99 million years ago isn’t the smallest dinosaur ever found. It is actually a lizard — albeit a really bizarre one.

Over the past year, scientists have puzzled over the nature of a strange, hummingbird-sized creature. It has a long, tongue-twister name: Oculudentavis khaungraae. Its remains turned up in amber deposits in Myanmar. (That’s an eastern neighbor of India and Bangladesh.) The fossil consists of only a rounded, birdlike skull. It has a slender tapering snout and a large number of teeth. It also has a lizard-like eye socket that is both deep and conical. The birdlike features led one team of scientists to identify the fossil as a miniature dinosaur. (Birds are considered to be modern dinosaurs.) This would make it the smallest dino ever found.

But some scientists were doubtful. Another analysis of the creature’s strange group of features suggested it instead looked more like a rather weird lizard.

Arnau Bolet is a paleontologist in Spain. He works at the Institut Català de Paleontologia Miquel Crusafont in Barcelona. His team now reports finding a second fossil that closely resembles the first. It also turned up in amber. Parts of the lower body on this newer fossil, clearly reveal it as a member of Oculudentavis, Bolet’s team reports. That’s a lizard genus. They named the new specimen O. naga. These scientists also think this critter belongs to the same genus as the earlier fossil.

The researchers used CT scans to examine both specimens. Lizard-like features include scales and teeth attached directly to the jawbones. Dinosaur teeth, in contrast, are housed in sockets. Both critters also have a particular skull bone unique to scaled reptiles.

Their rounded skulls and long tapering snouts aren’t typical of lizards, however. In fact, the researchers note, their unusual mix of traits make both creatures very different from all other known lizards.