Six housemates in the BBNaija season 6 Shine Ya Eye edition have been nominated  for possible eviction.

These housemates include Princess, Saskay, Arin, Nini, Tega and Emmanuel.

Their nomination was announced on Monday after each housemate nominated two other housemates, they would like out of the game.

Out of the 23 housemates currently on the show, only 19 of them were made to do this considering that the new additions had only spent a day on the show.

Initially, Saskay was not up for eviction but the new Head of House, Pere used his veto power to save Saga and replaced him with Saskay.

See how the housemates voted:

Jackie B – Saga and Nini 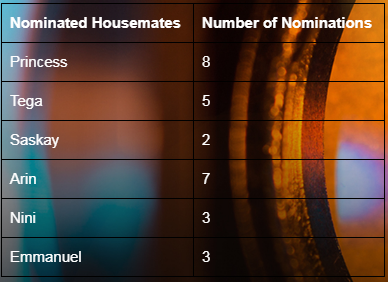