Buhari signing of PIB: Petrol may sell for N300, FG to decide on subsidy, others today 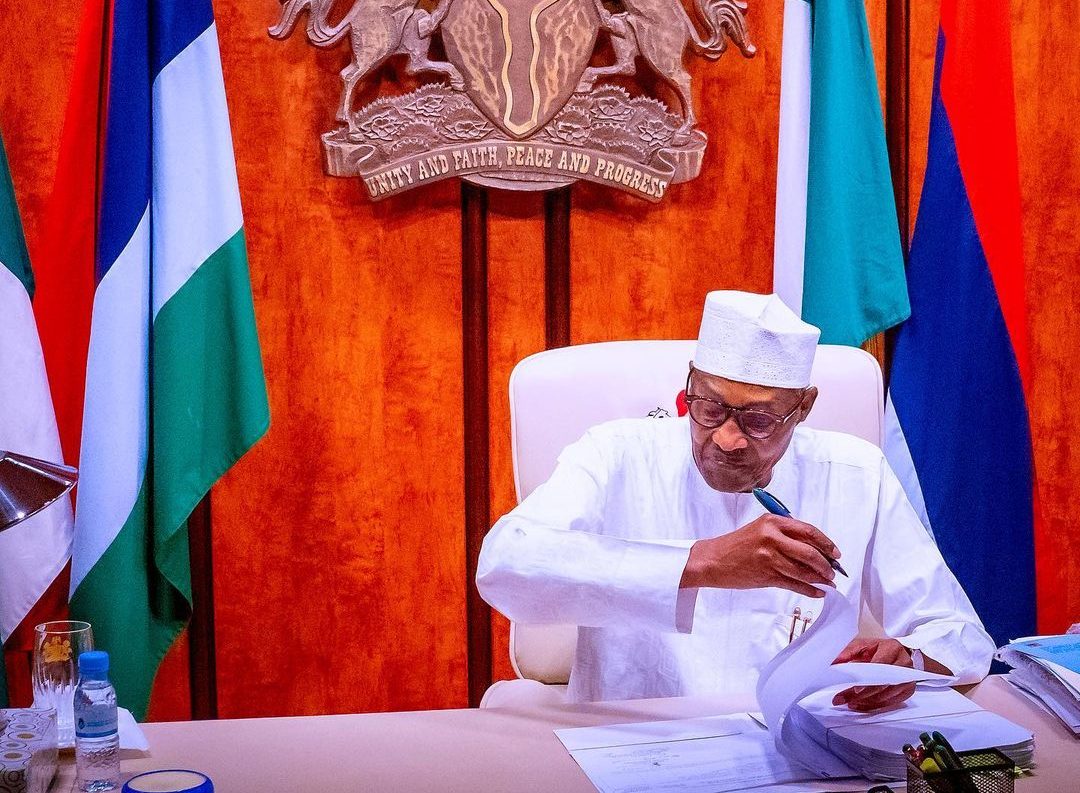 The Federal Government may soon end the fuel subsidy regime with the signing of the Petroleum Industry Bill by the President, Major General Muhammadu Buhari (retd.), on Monday.

The PUNCH gathered on Monday that the government’s position of fuel subsidy would form the major item during the Minister of State for Petroleum Resources, Chief Timipre Sylva’s press conference on the petroleum industry law, which holds today (Tuesday).

It was gathered that with the signing of the PIB into law, the cost of petrol could jump to as high as N300 per litre from the current N162-N165 per litre upon the implementation of the law if market forces were allowed to determine the price as stipulated in the new law.

It was learnt that another issue that the minister would address was the unbundling of the Nigerian National Petroleum Corporation.

The Special Adviser to the President on Media and Publicity, Femi Adesina, in a statement on Monday, disclosed that Buhari had signed the PIB.

Working from home for the five-day quarantine as stipulated by the Presidential Steering Committee on COVID-19 after returning from London on Friday, August 13, the President assented to the Bill.

In the original version of the executive bill, five per cent of oil revenue was proposed for the oil-bearing communities.

The Senate and the House, in passing the PIB, had approved three per cent and five per cent, respectively for the host communities.

Both chambers had set up the conference committee to harmonise the differences in their versions of the PIB.

The conference committee had approved three per cent, which generated protests in the House.

While the Senate adopted the three per cent recommendation on July 15, 2021, the consideration of the report by the committee was frustrated by southern members in the House, forcing the Speaker, Femi Gbajabiamila, to step it down.

The House, however, adopted the three per cent and passed the PIB without the votes of members of the minority caucus, who are predominantly southern lawmakers.

The action of the National Assembly attracted condemnation from groups, including the Pan-Niger Delta Forum, which described the approved percentage as injustice to the people of the Niger Delta region.

The various groups urged the President not to sign the bill.

A top official of the Ministry of Petroleum Resources, who confided in The PUNCH, on Monday, said, “The minister will at the press conference tomorrow (Tuesday) explain the government policy direction on fuel subsidy, but if what he said in the past is anything to go by, he may announce a fresh direction on subsidy, which will be removed with the signing of the PIB.”

Recall that Sylva had in July explained that subsidy on Premium Motor Spirit, popularly called petrol, would come to an end once the PIB was signed into law by the President.

The minister had said, “This (subsidy removal) is desirable for the interest and growth of Nigeria. Of course, everybody will have their perspectives, but from where I sit, I believe that subsidy removal is the best thing for Nigeria and not just the industry.

“So far, discussions with stakeholders are still ongoing. But I will also bring it to your attention that today, when the President assents the PIB, subsidy will become a matter of law, because it is already in the PIB that petroleum products will be sold at market-determined prices.”

Also in June, the Group Managing Director of the NNPC, Mele Kyari, had explained that the price of petrol should be more than the N280 per litre at which Automotive Gas Oil, also known as diesel, was being sold then.

The NNPC boss explained that the difference between the prices of petrol and diesel should be around N10 per litre, with petrol having the higher cost.

Kyari had said, “Today, we are paying N162 per litre (for petrol). I am sure that many people buy AGO (diesel) in the market and it is selling at N280 per litre in the market today.

Findings in Abuja on Monday showed that diesel was selling for around N290 per litre, meaning that petrol should be selling around N300 per litre, going by Kyari’s explanation.

Oil marketers on Monday told The PUNCH that with the signing of the PIB, subsidy on petrol had effectively ended.

The President, Petroleum Products Retail Outlets Owners’ Association of Nigeria, Billy Gillis-Harry, said, “The critical thing for us is that the PIB addresses the issue of subsidy removal on petroleum products that has been impacting so negatively on Nigeria’s economy,

“So, as a responsible association, we want to support the government, the minister, the NNPC GMD etc. on this because we shouldn’t be spending so much subsidising petroleum products.

“So, let the market forces determine that and the PIB, which has been passed into law, addresses that. So, right now, subsidy on petrol has stopped going by the law. Implementation is the next thing.”

When contacted, senior officials of the petroleum ministry stated that the minister would speak on it today (Tuesday).

“The minister will brief the press on Tuesday or after the FEC (Federal Executive Council) meeting on Wednesday,” the Technical Adviser on Gas Business and Policy Implementation to the Minister of State for Petroleum Resources, Justice Derefaka, stated.

Minister will tell Nigerians the next step today – Aide

Also, the Special Assistant on Media to the Minister of State for Petroleum Resources, Garba-Deen Muhammad, said, “The minister will tell the press the next steps tomorrow (Tuesday).”

However, a professor of Petroleum Economics and Policy Research, Wumi Iledare, told one of our correspondents that the NNPC would not remain the same going by the provisions of the new law.

“Let us see the real Act first. The NNPC is not going to be the same under this Act if implemented correctly. There is a six-month window. Implementation is the key,” he stated.

Iledare said the Act had an investment-friendly fiscal framework with well designed regulatory and governance institutions.

He said, “The next phase is implementation without regulatory and institutional captures. One can only hope for the appointment of competent professionals with diverse work experiences as members of the implementation committee.

“Although I have no crystal ball, but I am confident the Act stands a good chance to enhance the industry’s value to the economy.”

In a letter to the President, the Secretary General, Organisation of Petroleum Exporting Countries, Sanusi Barkindo, said the bill would attract investments to Nigeria.

He said, “Indeed, the new law will enhance the Nigerian petroleum industry’s reputation, open the door to new investments, and ultimately strengthen its position to meet the world’s growing demand for energy.

“The enactment of this legislation is especially timely as the investment outlook becomes clouded by efforts aimed at accelerating a lower-carbon future.

“Furthermore, the new law will help harness Nigeria’s potential to achieve its programme of raising oil production to four million barrels per day and oil reserves to 40 billion barrels.”

On his part, the Executive Secretary, Nigeria Extractive Industries Transparency Initiative, Dr Orji Ogbonnaya-Orji, said the new law had ended decades of uncertainty concerning the future of the country’s oil and gas sector.

He stated, “The new law has opened a new phase of wider opportunities in the oil and gas industry.

“For us in NEITI, President Buhari has broken new grounds and has created a new business horizon built on healthy legal frameworks that will push the boundaries of reforms in the sector with realistic optimism for inflow of investments, revenue growth and job opportunities.”

On its part, the National Assembly hailed the record signing of the PIB into law, describing it as a landmark victory for Nigerians.

The Speaker of the House of Representatives, Femi Gbajabiamila, said Nigeria’s oil and gas industry would now “receive a breath of fresh air and allow investments and transparency to flourish with the coming into being of the Petroleum Industry Act, 2021.”

Gbajabiamila, in a statement by his Special Adviser on Media and Publicity, Mr Lanre Lasisi, stated that the coming into being of the law was a victory for Nigerians and a landmark achievement that ended the two-decade-long journey of the PIB.

In the statement titled: ‘Investments, transparency will now flourish in our oil, gas industry –Gbajabiamila…hails Buhari for signing PIB’, the Speaker also noted that when massive investments come in as a result of the Act, a lot of Nigerians would be employed.

Similarly, the Senate described the assent of the PIB by Buhari as a major victory that had the potential of bailing Nigeria out of its economic predicament, adding that the Act would enable the country to make the most of the economic gains of the industry for the benefit of Nigerians.

The Chairman of the Senate Committee on Media and Public Affairs, Senator Ajibola Basiru, in his reaction to the assent, attributed the success to the cooperative efforts by all stakeholders in the process and the non-confrontational policy of the present National Assembly.

Meanwhile, at a public hearing on the 2022-2024 Medium Term Expenditure Framework and Fiscal Strategy Paper organised by the House of Representatives’ Committee on Finance in Abuja, on Monday, the Minister of Finance, Budget and National Planning, Zaniab Ahmed, lamented that Nigeria continued to be exposed to risk aversion in the global capital markets, which would put further pressure on the foreign exchange market, as foreign portfolio investors had yet to return to the Nigerian market.

Ahmed said the situation was compounded by sustained perceptions about the over-valuation of the naira despite recent adjustments by the Central Bank of Nigeria.

Ahmed also decried that subsidy (also referred to as under-recovery) on the pump price of Premium Motor Spirit had become a burden on the government, which must be addressed urgently.

The minister said, “The draft 2022-2024 MTEF/FSP has been prepared against the backdrop of global economic recovery amidst improved vaccination outlook and lower incidence of infection despite recent surge in the Delta variant. However, the Medium Term Fiscal Framework shows that there are continuing global challenges in the aftermath of the COVID-19.

“Overall, fiscal risks are somewhat elevated for Nigeria due to persisting weaknesses in the economy and slower than expected recovery. The weaker-than-expected economic performance threatens our ambitious revenue growth targets, as seen in the 2021 performance up to June.

“Non-oil revenue performance has been impressive and heading in the right direction. Efforts will be sustained in this regard.

“High costs, including PMS under-recovery and cost of securing oil pipelines, are, however, weighing down on oil revenues. These issues must be addressed wholesomely to free up much needed fiscal space.

The Pan Niger Delta Forum has said the President’s assent to the PIB despite opposition from various southern groups was a sad day for the people of the Niger Delta region.

The National Publicity Secretary of PANDEF, Ken Robinson, said this in a telephone interview with one of our correspondents on Monday.

Robinson said the action of the President showed insensitivity and disregard towards the feelings of the Niger Delta people.

“It is very unfortunate and very sad that in spite of the outcry and the condemnation that greeted the National Assembly’s approval of the PIB, a paltry three per cent is allocated for the host communities’ development and the outrageous 30 per cent of the NNPC’s profit that is allotted for oil exploration in the frontiers, which we know is basically North-East Nigeria, perhaps North-Central Nigeria.    ,,