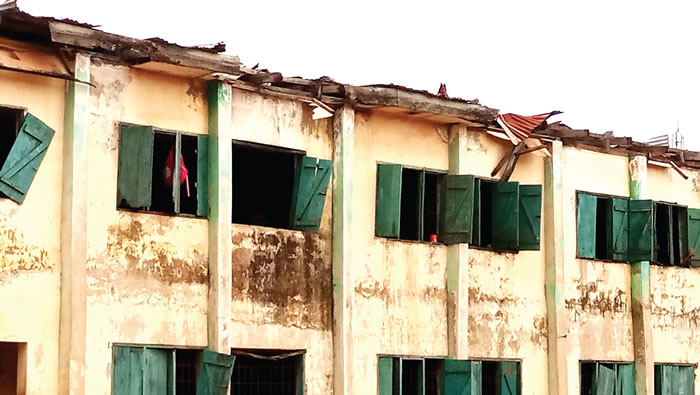 RAPHEL EDE writes on the plight of pupils of the Idaw River Primary School, 1, Enugu SouthLocal Government Area of Enugu State, whose classroom roof fell and injured 10 of them

Teachers and pupils of Idaw River Primary School 1 don’t pray for rain because whenever it rains, they scoop water from their classrooms.

On June 23, 2021, Master Chinedu Arinze, a primary six pupil of Idaw River Primary school, 1, escaped death by whisker when a dilapidated roof collapsed on over 70 pupils in a classroom.

The falling roof broke Arinze’s right hand and he suffered other injuries when a plank fell on him.

Ten other schoolchildren were also reported to have sustained varying degrees of injury during the incident.

The PUNCH gathered that the incident happened when the children were scooping water that flooded their classroom during a heavy rainfall that fateful day.

This is the lot of over 1,600 pupils of the Idaw River Primary schools 1, 2, 3 and 4, who face threat of death everyday they come to school as a result of the dilapidated state of the block of classrooms they study in.

Our correspondent, who visited the schools, which are housed in one compound, reports that the one-storey block of six classrooms for each of the schools had its roof either heavily leaking water or partially blown out by windstorm. Some windows have fallen off, while others are dangling dangerously and may fall on the children’s heads.

It was observed that the schools had no toilet facilities for the children as the surroundings were dotted with faeces. Children defecate on the field and around the compound anytime they had to answer the call of nature. There was no water tank or tap water. The schoolchildren were at the mercy of infectious disease.

Chinasa Ani, a primary six pupil of Idaw River Primary School 1, who narrated the unpleasant and seemingly unending experience, appealed to the Enugu State Government to come to their aid and reconstruct the school so as to save them from daily threat of injuries and death.

She said, “We are 70 pupils in a class. Our roof fell down and knocked one of my classmates, Arinze, and injured him. A plank of wood broke his hand and wounded some of our classmates. Anytime rain falls, the entire classrooms will be flooded. Since the rain started, we scoop water out every day we come to school. Even today, we scooped the water that flooded the classrooms and that is what we do every time it rains.

“If it is raining while in class, we will become restless as we keep scooping water out of the classrooms. The roof of the entire block of schools is heavily leaking water. There is hardly any day it rains while in school that our uniforms will not be wet.”

She added, “Every time it rains, our teacher will continue to move her table around to save the instructional materials from damage. You can see for yourself, our teacher was sitting near the window in front of the class but she is now hiding here at the back because of rain.

“Also, some pupils in the class beside us were equally wounded when the roof of their classroom came down a few days ago. The incident also affected pupils in primary four and five. We are appealing to the government to come and help us renovate the school like other schools.”

The girl, who passionately spoke on behalf of her class, also appealed to the government to assist the parents of Arinze, whom she said was still in hospital receiving treatment.

Collaborating Ani’s narration, a teacher, who spoke on condition of anonymity, said the heads of the schools had variously written to the Enugu South Local Government Education Authority and the Enugu State Universal Basic Education Board on the state of the schools and the need for urgent intervention, but had yet to get a response.

The teacher added, “Our biggest challenge is the roof of the school. When the rain comes, everybody in the school will not be comfortable anymore. Every part of the classrooms is leaking. Even the foundation of this school building is collapsing. Everywhere is uncomfortable for us. We don’t have toilets for the children; they defecate at the back of their classrooms and on the field. We don’t have toilets at all; the one that is there is very bad for the children to go to.”

On the efforts the schools had made to get the government’s attention to the situation, the teacher said, “We have written several times to the Enugu State Universal Basic Education Board that the school is collapsing on the children, but all to no avail. Numerous times we have written to them. They came last term to mark the building, but we have not seen any action.”

On how they manage the children in the dilapidated school building, the teacher added, “We are managing them as much as we can because there is nowhere to go. We have no power to ask the children not to come to school; the only thing we do whenever it rains is to squeeze the children in the few classes where the rain will not beat them.

“There is no other place we can shelter ourselves except here. Whenever the rain falls, all of us will go to one side and stay until it stops. We have four schools here and in our own school 1, we have over 400 pupils.”

Another teacher in school 3, who did not want the name mentioned for fear of victimisation, said, “Our roof has collapsed for over a year now and each time it rains, we keep pouring out water and scrubbing for almost two to three hours before we can take our lessons for the day.

“If we spend three hours draining water out of the classrooms and we have six and a half hours or seven hours as the case may be, it means we have spent half of the school time to prepare our classrooms. It is so unfortunate because it is not supposed to be so. We have written several times to the authorities concerned but there has been no response. I don’t know if they are waiting for any report of death before intervening. They have come so many times and taken pictures of the schools but up till now, it has not been repaired.”

On open defecation in the compound, the teacher said, “It is because we don’t have enough toilets for the children and there’s no water. We have over 1,800 pupils in the schools. If you allow the children to go to the toilet, they will mess everything up, because there is no water. We need water and a tank. We have four schools here; in each school, we have over 400 pupils and because we don’t have toilets for children, they practice open defecation.”

When contacted, the Chairman of Enugu State Universal Basic Education Board, Chief Ikeje Asogwa, said he was aware of the situation in the schools, adding, “We have captured it already. We are just awaiting the release of funds to commence the reconstruction of the building.”

On the collapse of the roof on the schoolchildren recently, he said “I am not aware of the incident; I am just hearing it for the first time.”

When contacted last night, the state Commissioner for Education, Prof Uche Eze, said, “I contacted the Board in charge and they are taking necessary steps.”