Dinosaur families appear to have lived in the Arctic year-round 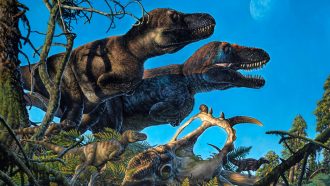 average: (in science) A term for the arithmetic mean, which is the sum of a group of numbers that is then divided by the size of the group.

biology: The study of living things. The scientists who study them are known as biologists.

ceratopsid: Powerful, four-legged plant-eating dinosaurs with one or more horns and a large protective frill covering its neck. Fossils of these were first discovered in the late 1800s. Triceratops remains the most renowned example. It sported three horns, one over its nose and another over each eye. Many other ceratopsid species exist, each a bit different in the size and shape of its horns and frill. Fossils from a weird hornless example turned up in 1950. In place of facial horns, this Pachyrhinosaurus had a lumpy mass of bone (called a nasal boss). Ceratopsids seldom were found outside what is now North America.

dinosaur: A term that means terrible lizard. These reptiles emerged around 243 million years ago. All descended from egg-laying reptiles known as archosaurs. Their descendants eventually split into two lines. Many large dinosaurs died out around 66 million years ago. But some saurischians lived on. They are now the birds we see today (and who have now evolved that so-called “bird-hipped” pelvis).

egg: A reproductive cell that contains half of the genetic information necessary to form a complete organism. In humans and in many other animals, ovaries produce eggs. When an egg fuses with a sperm, they combine to produce a new cell, called a zygote. This is the first step in the development of a new organism.”

fossil: Any preserved remains or traces of ancient life. There are many different types of fossils: The bones and other body parts of dinosaurs are called “body fossils.” Things like footprints are called “trace fossils.” Even specimens of dinosaur poop are fossils. The process of forming fossils is called fossilization.

hadrosaur: A duck-billed, plant-eating dinosaur that lived during the late Cretaceous Era.

hatchling: A young animal that recently emerged from its egg.

migrate: To move long distances (often across many countries) in search of a new home. (in biology) To travel from one place to another at regular times of the year to find food or more hospitable conditions (such as better weather). Species that migrate each year are referred to as being migratory.

paleontologist: A scientist who specializes in studying fossils, the remains of ancient organisms.

theropod: A term for so-called “beast-footed” dinosaurs. This diverse group of two-footed dinos included some of the largest, land-based meat-eaters. Tyrannosaurus rex and Deinonychus are among the best known. Today’s birds are direct descendants of this family of ancient beasts.

vegetation: Leafy, green plants. The term refers to the collective community of plants in some area. Typically these do not include tall trees, but instead plants that are shrub height or shorter.