NIGERIAN PLAYERS TRANSFERS OF THE SUMMER 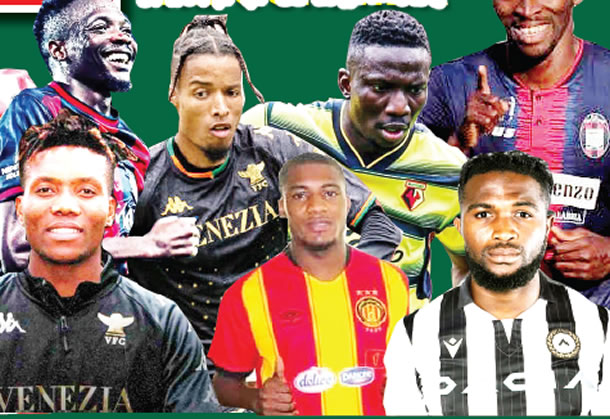 With the 2021 European summer transfer window set to close on today, KELVIN EKERETE takes a look at the Top 10 transfers of Nigerian stars in the new season

Combative midfielder, Frank Onyeka, was one of Nigeria’s biggest transfers of the summer after completing a move from Danish side, FC Midtjylland, to English Premier League newcomers Brentford for €10m on a five-year deal.

It is the highest amount paid for a Nigerian footballer this summer, followed by Taiwo Awoniyi’s €6.5m move from Liverpool to Union Berlin.

Onyeka is currently sidelined by COVID-19 but started life in England on a bright note and has earned plaudits from club manager Thomas Frank and the supporters.

After six years at English giants Liverpool without making a single appearance due to work permit issues, Taiwo Awoniyi made a permanent move to the German Bundesliga side, Union Berlin, signing a €6.5m deal with his new club after seven loan spells away from Anfield.

The 24-year-old is already enjoying his time in Berlin, scoring five goals in five appearances in all competitions.

His form has made him one of the most talked-about players in the Bundesliga.

After months of wanting a move away from Club Brugge, Nigerian forward Emmanuel Dennis finally made a permanent move to English Premier League side, Watford, on a five-year deal reportedly worth €4m.

The Nigerian had spent the latter half of the 2020/21 season on loan at German Bundesliga side Koln as he continued to force his exit out of the club.

He started life in England on a good note, scoring on his debut for the EPL newcomers.

Oghenekaro Etebo was deemed surplus to requirements at Stoke City for the 2021/22 season despite having an impressive loan spell at Turkish giants Galatasaray last season.

The combative midfielder was however snapped up by English Premier League returnees Watford on loan for the entire season.

After a short stint at boyhood club Kano Pillars in the Nigeria Professional Football League, Super Eagles captain, Ahmed Musa, returned to Europe with Turkish Super Lig side Fatih Karagümrük on a two-year deal for an undisclosed amount.

Musa has played in the club’s first two games providing an assist on his debut.

After his impressive loan stint at FC Twente in the Dutch Eredivisie in the 2020/21 season defender Tyronne Ebuehi made a move to Serie A newcomers Venezia for the 2021/22 season on July 1 from Portuguese outfit, Benfica.

The right-back fell down the pecking order after he copped an injury after the 2018 World Cup in Russia.

After five years at Italian side Crotone, Simy Nwankwo finally made a move to Salernitana on loan for the 2021/22 season after they failed to maintain their topflight status.

Simy, who scored 20 goals in 38 appearances for Crotone last season, will be hoping to take his scoring form along with him to his new team. He made a substitute appearance for the club in their thrilling 3-2 loss to Bologna as both teams ended the game 10-man apiece.

After failing to make an impact with Club Brugge in his first two seasons at the club, Nigerian striker David Okereke completed a loan move to Serie A side Venezia where he’ll team up with compatriot, Tyronne Ebuehi.

Tricky winger, Anayo Iwuala, completed one of the biggest deals in the NPFL in recent time, making a lucrative move to Tunisian giants Esperance on a three-year deal worth $500,000 from Enyimba.

The Eagles winger joined Enyimba from Delta Force in 2019. He is reportedly set to earn $45,000 at his new club.

Seven years after departing Udinese for Spain, Isaac Success made a sensational return to the Italian Serie A club from English Premier League side, Watford, on a three-year deal.

Success will be hoping to get his career back on track at the club where he played his youth football.

The winger endured a tough time during his stay in England, failing to hold down a starting spot. He also suffered long injury spells, especially in the 2020/21 season, scoring once in 10 appearances across all competitions.