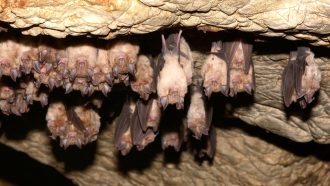 ACE2: Short for angiotensin-converting enzyme 2. This protein is a receptor found on the outside of many types of cells. The body uses it to cut up a larger protein. The smaller proteins that are left operate important functions in cells that host the ACE2 receptor. The coronavirus responsible for causing COVID-19 can latch onto this ACE2 and use it to infect a wide range of human cells.

amino acids: Simple molecules that occur naturally in plant and animal tissues and that are the basic building blocks of proteins.

antiviral: A virus-killing substance prescribed as a medicine.

bat: A type of winged mammal comprising more than 1,100 separate species — or one in every four known species of mammal. (in sports) The usually wooden piece of athletic equipment that a player uses to forcefully swat at a ball. (v.) Or the act of swinging a machine-tooled stick or flat bat with hopes of hitting a ball.

biologist: A scientist involved in the study of living things.

cell: The smallest structural and functional unit of an organism. Typically too small to see with the unaided eye, it consists of a watery fluid surrounded by a membrane or wall. Depending on their size, animals are made of anywhere from thousands to trillions of cells. Most organisms, such as yeasts, molds, bacteria and some algae, are composed of only one cell. rely on this system are typically referred to as cell phones.

computational: Adjective referring to some process that relies on a computer’s analyses.

coronavirus: A family of viruses named for the crown-like spikes on their surface (corona means “crown” in Latin). Coronaviruses cause the common cold. The family also includes viruses that cause far more serious infections, including SARS.

COVID-19: A name given to the disease that caused a massive global outbreak. It first emerged in December 2019 and is caused by a new coronavirus known as SARS-CoV-2. Symptoms can include pneumonia, trouble breathing, feeling too tired to walk more than a few steps, fever, headaches, low blood-oxygen levels, blood clots and brain “fog.”

genetic: Having to do with chromosomes, DNA and the genes contained within DNA. The field of science dealing with these biological instructions is known as genetics. People who work in this field are geneticists.

host: (in biology and medicine) The organism (or environment) in which some other thing resides. Humans may be a temporary host for food-poisoning germs or other infective agents. (v.) The act of providing a home or environment for something.

infect: To spread a disease from one organism to another. This usually involves introducing some sort of disease-causing germ to an individual.

mutation: (v. mutate) Some change that occurs to a gene in an organism’s DNA. Some mutations occur naturally. Others can be triggered by outside factors, such as pollution, radiation, medicines or something in the diet. A gene with this change is referred to as a mutant.

pandemic: An epidemic that affects a large proportion of the population across a country or the world.

pangolin: Any of eight species of scaly anteaters. Poaching — the illegal hunting — of these animals has been so intense in recent decades that as of 2014 these were judged  “the most illegally traded animal in the world.” The animals’ meat is sometimes served as a luxury dish in expensive Asian restaurants. Pangolin scales are used to treat medical conditions that range from cancer to skin diseases (without any scientific evidence that such a treatment works).

protein: A compound made from one or more long chains of amino acids. Proteins are an essential part of all living organisms. They form the basis of living cells, muscle and tissues; they also do the work inside of cells. Among the better-known, stand-alone proteins are the hemoglobin (in blood) and the antibodies (also in blood) that attempt to fight infections. Medicines frequently work by latching onto proteins.

scourge: A person or other organism that inflicts pain or threatens the success and wellbeing of others nearby.

transmit: (n. transmission) To send or pass along.

vaccine: (v. vaccinate) A biological mixture that resembles a disease-causing agent. It is given to help the body create immunity to a particular disease. The injections used to administer most vaccines are known as vaccinations.

virologist: A researcher who studies viruses and the diseases they cause.

virus: Tiny infectious particles consisting of RNA or DNA surrounded by protein. Viruses can reproduce only by injecting their genetic material into the cells of living creatures. Although scientists frequently refer to viruses as live or dead, in fact no virus is truly alive. It doesn’t eat like animals do, or make its own food the way plants do. It must hijack the cellular machinery of a living cell in order to survive.