Award-winning Nigerian rapper, Jude Abaga, popularly known as MI has taken to social media to recount his experience in a police station on Tuesday night.

The ex-Chocolate City boss urged Nigerians to get their Permanent Voters Card ready after his two-hour experience in a police cell.

Taking to his Insta-story on Wednesday, Abaga painted a disappointing picture of the living condition in a police station, while emphasizing that the working conditions and dilapidated structure of police stations need to be addressed by the government.

The rapper urged his fans and Nigerians alike to make their decisions by getting their PVC ready to vote for a true leader while stressing that as a nation, ‘we have work to do.’

“We have work to do as a country! Get your PVC

“GET YOUR DAMN PVC.” 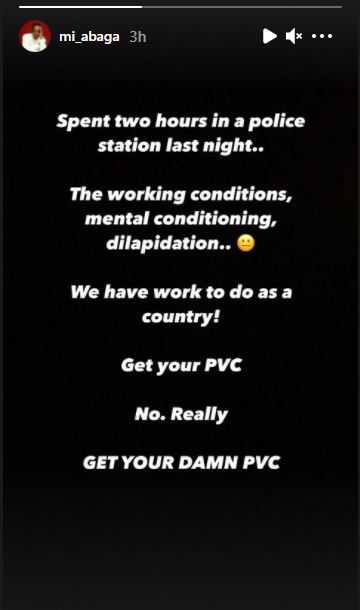 He won Best Hip Hop and Best New Act at the 2009 MTV Africa Music Awards, and was nominated in the Best International Act category at the BET Awards 2010.