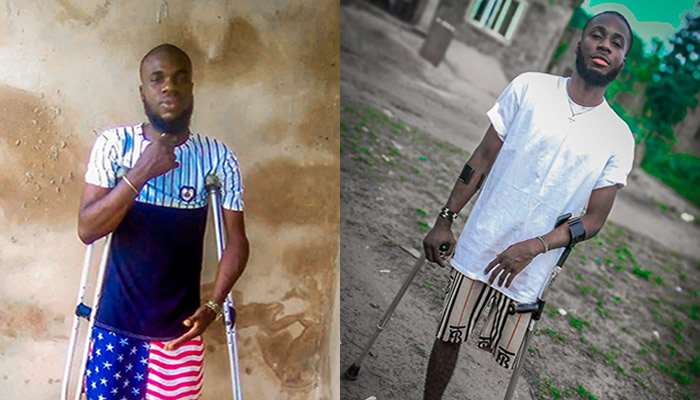 Andreas and Chidiebere Idika are currently basking in the euphoria of a new lease of life. They are about  to get artificial limbs procured by members of a Facebook community.

Unlike many who found love and care among family members, they met theirs on YorochiTv, a Facebook community connecting youths from different backgrounds across Nigeria and beyond.

For the natives of Ohafia Local Government Area in Abia State, growing up was filled with rough patches. Their mum, Mary, had been shouldering the upkeep through thick and thin since 2004 when she separated from her husband.

She retailed foodstuffs to send them to school and provide for their daily needs. Years on, Mary’s struggle had manifested significantly in the siblings’ lives.

With Andreas already in 300-level at the University of Calabar, Cross River State, last year and his elder brother about to commence a Higher National Degree in Building Technology, Mary was upbeat she would soon reap the fruits of her labour.

While lockdowns occasioned by the COVID-19 pandemic and Academic Staff Union of Universities’ strike lasted for months, Andreas was at home assisting his mum in garri (a staple food) production.

On May 30, 2020, fate, not the pandemic, dashed their hopes. Earlier that day, Mary had invited 22-year-old Andreas, who resides with his elder brother in another location, to join her in grinding cassava to process garri.

He went to play football after completing the task and called Chidiebere, who rides a motorcycle, to pick him up in the evening.

On their way home around 10pm, they were involved in a hit-and-run crash that left their left legs badly crushed.

“A motorcycle carrying a long heavy object rammed into us and it crushed our legs,” Andreas, a final year Theatre Arts student, recalled, painfully. “I wanted to help my brother only to realise that my leg was broken. His condition was worse. It was around 12am when we got some people to take us to a hospital.”

Two days later, they were referred to an orthopaedic hospital in Umuahia, Abia State capital where their legs were amputated.

“My amputation was initially below the knee but after a week, the spot got worse and they had to cut it above the knee,” he explained, his voice trembling. “Our mum struggled to pay our hospital bill. It was about N2.5m. She borrowed and got support from well-meaning Nigerians. We were discharged in September.” He added that their father who separated from their mother in 2004 sent N6,000 out of the bill.

Saturday PUNCH learnt that the hit-and-run rider and the passenger he carried were later tracked down by vigilantes and handed over to the police but were eventually released and now walk freely on the streets.

That day, Chidiebere’s friends had advised him against picking up his brother as it was already late. But mutual love bound by a common fate would not let him heed the warning.

“We have always been together so there was no way I could have slept that night without him,” Chidiebere, 32, said.

On their way home on a motorcycle, Chidiebere heard the sound of an oncoming bike whose headlamp was off. He was trying to negotiate his way when the heavy object on the bike fell on him and Andreas.

He added, “We heard a loud bang like a bomb explosion. It was a terrible incident but in all, I give God the glory. The object hit my left leg and left hand. I initially thought it was a minor injury. It was when I tried to run after the individuals on the bike that I discovered I had lost my leg.

“At that moment, my mum called to know if we were home as she normally did anytime we left her house. We initially didn’t pick up the calls. She called up to three times before I picked up. I promised to call her when we got home but she was disturbed and kept asking about our whereabouts. I eventually called her when we got to the hospital and told her we had a minor accident.”

Chidiebere said they were discussing business plans that night when the accident occurred, adding that he had planned to open a building material outlet.

The siblings’ future hung in the balance in the aftermath of the crash. Their burning ambitions were falling apart at the seams. Andreas lost out in the race to become a famed professional dancer while his brother’s HND programme was put on hold.

“I was part of an African dance crew called Passion 4 but I don’t have a chance in that group anymore,” he lamented. “Aside from being a theatre artist, I also do photography. In my department, I can no longer engage in acting whereas I participated in almost every production up till my 200 level.”

The only play he featured in since he had the accident was a type cast – a storyline that fit into his physical appearance.

“Most of the time, they didn’t want to stress me,” he said. “I have been leading a routine life of going to school and returning home without engaging in practical aspects of the course.”

“It has not been easy since we had the accident,” Chidiebere said, noting that their mum had to work harder to cater for them.

He added, “We always look up to her for feeding when we are supposed to be helping her. She now goes to the farm and does hard tasks we should have helped her to carry out. It has been very hard but we thank God for life.  As soon as I get a prosthesis, I will find something to do at least to help my mum.”

I watched as people pick my children’s bones

At 47, Mary Idika looks pretty older than her age. Dark spots are fast eroding her light-complexioned skin; stress deeply etched on her wrinkled face. Her gold necklace and well-trimmed afro betrayed difficult moments the mother of two has endured.

In a measured tone, she narrated how the tragic May 30 incident dealt the family a huge blow and threw her into a serious financial crisis.

She recalled, “Andreas came that day to help me with garri processing. In the evening, he called his brother to pick him up and they left. After a while, I called them to know if they had got home. I called them about three times but they didn’t pick up the calls.

“I prayed to God to protect them wherever they were that day. Chidiebere later picked up my call and told me not to worry. He said I should go and sleep but I insisted I wanted to know what happened. He said they had a minor accident along Uguaba and that they were in a nearby hospital.”

Mary said on her way to the hospital, she met a crowd picking bones on the ground and crying.

She stated, “I said, ‘God don’t allow these people (the victims) to die’ not knowing that they were my children. I have spent everything I had on their treatment and even borrowed.

“My shop has shut down due to financial difficulties. I have been the only person struggling to fend for them. Their father and his family are aware of their plight but they are not assisting in any way.”

When our correspondent requested the phone contact of her estranged husband or any family members, Mary and her children declined, saying calling them “is of no use.”

Online family comes to the rescue

During the lockdown in 2020, Andreas joined the Facebook community – YorochiTv – before the accident to connect with people and leverage the platform for opportunities. Luckily, the virtual community is now lifting him and his brother from the abyss of hopelessness. They will soon walk without crutches. With about N2m raised from the group to get them prostheses billed for completion in a few days, the siblings are regaining morale and ready to have a second shot at life.

“After my post on the group on my birthday on August 12, I started getting a lot of reactions,” Andreas stated, flashing a wry smile. “I also attended the group’s get-together in Uyo (Akwa Ibom State) in August and met its founder. Since that meeting, my life has witnessed a positive change. Now, I intend to go into content creation and entertainment.”

Andreas had in the post expressed how the group, restored his confidence and wished to get an artificial leg for improved mobility to enable him pursue his dream.

“Our membership covers people between 18 and early 30s,” the founder of the group, David Iyenyorochi, said. “Aside from connecting online, we hold in-person programmes to reinforce the connection. We go from city to city to meet.”

Andreas’ bubbly mien at the Uyo gathering attracted him. He was awe-struck to know the young man travelled from Cross River where he schools to attend the hangout.

“I asked our coordinator in Akwa Ibom to get information about him,” Iyenyorochi added. “Two days after I returned to my base in Lagos was his birthday. He posted it on the group and made a wish to get a prosthetic leg. I reposted it and gave him a call. I was so emotional after he told me his full story. I started making calls to seek funds for him. I assured him he would get the prosthesis.”

It was gathered that within 24 hours of the post, the group members had donated N1.1m to get Andreas an artificial leg and some were even making an appeal “to complete the joy of the family” by also getting prosthesis for Chidiebere.

“That gave me a push to ask people again to contribute for his brother’s prosthesis. Within the next 48 hours, we got N2m,” the founder enthused. “We have already paid for the artificial legs and they have gone for casting to get the perfect fit. The prostheses should be ready on Wednesday.”

He added, “They will do physiotherapy for another week. We have also visited their mum. We have a number of people supporting him. We can leverage that to get them something that can sustain them. The doctor said they could do some physical activities after getting the prostheses. So we are looking at what they can do best.”