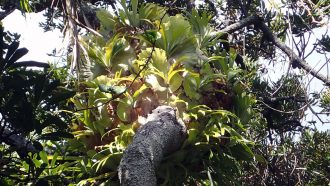 behavior: The way something, often a person or other organism, acts towards others, or conducts itself.

biologist: A scientist involved in the study of living things.

caste: (in biology) A group within a population of animals (usually social insects, such as bees), that is distinguished by some narrow task it performs for its community. For instance, worker bees are a caste whose only role is to forage food to bring back to their hive.

colonial: (in biology) Organisms that live as part of a structured and organized community.

core: Something — usually round-shaped — in the center of an object.

data: Facts and/or statistics collected together for analysis but not necessarily organized in a way that gives them meaning. For digital information (the type stored by computers), those data typically are numbers stored in a binary code, portrayed as strings of zeros and ones.

develop: To emerge or to make come into being, either naturally or through human intervention, such as by manufacturing. (in biology) To grow as an organism from conception through adulthood, often undergoing changes in chemistry, size, mental maturity or sometimes even shape. (as with towns) The conversion of wildland to host communities of people. This development can include the building of roads, homes, stores, schools and more. Usually, trees and grasslands are cut down and replaced with structures or landscaped yards and parks.

diversity: A broad spectrum of similar items, ideas or people. In a social context, it may refer to a diversity of experiences and cultural backgrounds. (in biology) A range of different life forms.

ecology:  A branch of biology that deals with the relations of organisms to one another and to their physical surroundings. A scientist who works in this field is called an ecologist.

epiphyte: A plant that grows on another plant and depends on it for support but not for food. Some epiphytic plants may grow high on tree branches, seemingly rooted in the air.

eusocial: (in zoology) A term for the type of organized community that some species develop. In them, individuals take on specialized and usually lifelong jobs that support one or more needs of the entire community. For instance, a single female or caste may produce all the young. Others may cooperate in caring for those young or forage for food to support those at home.

evolutionary biologist: Someone who studies the adaptive processes that have led to the diversity of life on Earth. These scientists can study many different subjects, including the microbiology and genetics of living organisms, how species change to adapt, and the fossil record (to assess how various ancient species are related to each other and to modern-day relatives).

evolve: (adj. evolving) To change gradually over generations, or a long period of time. In living organisms, such an evolution usually involves random changes to genes that will then be passed along to an individual’s offspring. These can lead to new traits, such as altered coloration, new susceptibility to disease or protection from it, or different shaped features (such as legs, antennae, toes or internal organs). Nonliving things may also be described as evolving if they change over time. For instance, the miniaturization of computers is sometimes described as these devices evolving to smaller, more complex devices.

frond: The large leaf (or leaf-like) part of a fern, palm or other plant whose edges have many parts to it, sometimes known as leaflets.

gene: (adj. genetic) A segment of DNA that codes, or holds instructions, for a cell’s production of a protein. Offspring inherit genes from their parents. Genes influence how an organism looks and behaves.

generation: A group of individuals (in any species) born at about the same time or that are regarded as a single group. Your parents belong to one generation of your family, for example, and your grandparents to another. Similarly, you and everyone within a few years of your age across the planet are referred to as belonging to a particular generation of humans.

genetic: Having to do with chromosomes, DNA and the genes contained within DNA. The field of science dealing with these biological instructions is known as genetics. People who work in this field are geneticists.

insect: A type of arthropod that as an adult will have six segmented legs and three body parts: a head, thorax and abdomen. There are hundreds of thousands of insects, which include bees, beetles, flies and moths.

Madagascar: This island nation sits in the Indian Ocean, just east of the African nation of Mozambique. The world’s fourth largest island, Madagascar is home to many unique animals that have evolved in relative isolation. These include a number of primates, such as lemurs, chameleons of all sizes, birds and lots of butterflies.

native: Associated with a particular location; native plants and animals have been found in a particular location since recorded history began. These species also tend to have developed within a region, occurring there naturally (not because they were planted or moved there by people). Most are particularly well adapted to their environment.

network: A group of interconnected people or things. (v.) The act of connecting with other people who work in a given area or do similar thing (such as artists, business leaders or medical-support groups), often by going to gatherings where such people would be expected, and then chatting them up. (n. networking)

New Zealand: An island nation in the southwest Pacific Ocean, roughly 1,500 kilometers (some 900 miles) east of Australia. Its “mainland” — consisting of a North and South Island — is quite volcanically active. In addition, the country includes many far smaller offshore islands.

nurse: (in biology) A term for suckling a young mammal so that it can feed on its mother’s milk. Or individuals that care for others within their community.

nutrient: A vitamin, mineral, fat, carbohydrate or protein that a plant, animal or other organism requires as part of its food in order to survive.

society: An integrated group of people or animals that generally cooperate and support one another for the greater good of them all.

spore: A tiny, typically single-celled body that is formed by certain bacteria in response to bad conditions. Or it can be the single-celled reproductive stage of a fungus (functioning much like a seed) that is released and spread by wind or water. Most are protected against drying out or heat and can remain viable for long periods, until conditions are right for their growth.

sterile: An adjective that means devoid of life — or at least of germs. (in biology) An organism that is physically unable to reproduce.

termite: An ant-like insect that lives in colonies, building nests underground, in trees or in human structures (like houses and apartment buildings). Most feed on wood.

transition: The boundary where one thing (paragraphs, ecosystems, life stage, state of matter) changes or converts into another. Some transitions are sharp or abrupt. Others slowly or gradually morph from one condition or environment to another.