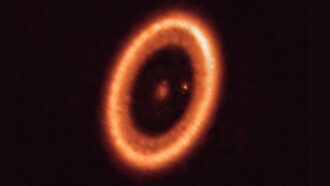 array: A broad and organized group of objects. Sometimes they are instruments placed in a systematic fashion to collect information in a coordinated way. Other times, an array can refer to things that are laid out or displayed in a way that can make a broad range of related things, such as colors, visible at once. The term can even apply to a range of options or choices.

astrophysicist: A scientist who works in an area of astronomy that deals with understanding the physical nature of stars and other objects in space.

coauthor: One of a group (two or more people) who together had prepared a written work, such as a book, report or research paper. Not all coauthors may have contributed equally.

debris: Scattered fragments, typically of trash or of something that has been destroyed. Space debris, for instance, includes the wreckage of defunct satellites and spacecraft.

disk: A round, flat and usually fairly thin object. (in astronomy) A rotating cloudlike collection of gases, dust or both from which planets may form. Or the structure of certain large rotating bodies in the cosmos, including spiral galaxies.

exomoon: A moon that orbits an exoplanet.

exoplanet: Short for extrasolar planet, it’s a planet that orbits a star outside our solar system.

insight: The ability to gain an accurate and deep understanding of a situation just by thinking about it, instead of working out a solution through experimentation.

journal: (in science) A publication in which scientists share their research findings with experts (and sometimes even the public). Some journals publish papers from all fields of science, technology, engineering and math, while others are specific to a single subject. The best journals are peer-reviewed: They send all submitted articles to outside experts to be read and critiqued. The goal, here, is to prevent the publication of mistakes, fraud or sloppy work.

light-year: The distance light travels in one year, about 9.46 trillion kilometers (almost 6 trillion miles). To get some idea of this length, imagine a rope long enough to wrap around the Earth. It would be a little over 40,000 kilometers (24,900 miles) long. Lay it out straight. Now lay another 236 million more that are the same length, end-to-end, right after the first. The total distance they now span would equal one light-year.

moon: The natural satellite of any planet.

orbit: The curved path of a celestial object or spacecraft around a galaxy, star, planet or moon. One complete circuit around a celestial body.

planet: A large celestial object that orbits a star but unlike a star does not generate any visible light.

Pluto: A distant world that is located in the Kuiper Belt, just beyond Neptune. Pluto is the ninth largest object orbiting the sun.

solar system: The eight major planets and their moons in orbit around our sun, together with smaller bodies in the form of dwarf planets, asteroids, meteoroids and comets.

star: The basic building block from which galaxies are made. Stars develop when gravity compacts clouds of gas. When they become hot enough, stars will emit light and sometimes other forms of electromagnetic radiation. The sun is our closest star.

sun: The star at the center of Earth’s solar system. It is about 27,000 light-years from the center of the Milky Way galaxy. Also a term for any sunlike star.

telescope: Usually a light-collecting instrument that makes distant objects appear nearer through the use of lenses or a combination of curved mirrors and lenses. Some, however, collect radio emissions (energy from a different portion of the electromagnetic spectrum) through a network of antennas.

wavelength: The distance between one peak and the next in a series of waves, or the distance between one trough and the next. It’s also one of the “yardsticks” used to measure radiation. Visible light — which, like all electromagnetic radiation, travels in waves — includes wavelengths between about 380 nanometers (violet) and about 740 nanometers (red). Radiation with wavelengths shorter than visible light includes gamma rays, X-rays and ultraviolet light. Longer-wavelength radiation includes infrared light, microwaves and radio waves.